Choirs by Candlelight: The Fourth Choir

Join a free concert of Renaissance Venetian music by the Fourth Choir, London's LGBT + chamber choir, led by conductor Dominic Ellis-Peckham. Prior to the concert, curator Matthew Storey will give a short talk on "Opera and Queer". 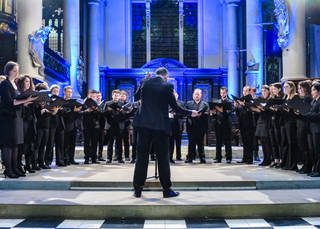 In this special performance in the V&A's Medieval Tapestry Gallery, The Fourth Choir will perform highlights from their recent “Chiesa d’Oro” concert. The “Church of Gold” has been the affectionate nickname of St Mark’s Basilica in Venice for centuries and the Fourth Choir will be singing works by composers who lived or studied in Venice when the Venetian Republic was at the height of its power and influence in the 16th and 17th centuries.

The exhibition Opera: Passion, Power and Politics portrays how Venice was the capital of the operatic world at this time, but it was also a centre for music written to be performed in both religious and secular surroundings. As well as works by Monteverdi, Legrenzi and Schütz, the Choir will perform a piece by Barbara Strozzi whose portrait appears in the exhibition. Strozzi was not only the most famous singer in Venice but also the most popular composer of secular music at this period. Accompanied by Jonatan Bougt on the lute, the Choir will be singing Strozzi’s “L’Amante Modesto”, a thrillingly operatic secular cantata. And, as this concert takes place on 1 December, there may even be a festive piece to put you in the Christmas mood...

The Fourth Choir was founded in September 2013 in order to give both professional and non-professional LGBT+ singers and their allies the opportunity to sing a cappella choral music to the highest standard possible. Since then, the Fourth Choir has given 50 concerts in 38 different venues in 4 countries. Highlights include receiving standing ovations at the International LGBT+ Choir Festival at the Concertgebouw in Amsterdam, at the Antwerp Queer Arts Festival and at a benefit concert for the Hackney and Harringay Migrant Support Centres. The Choir has also performed at many of London’s iconic cultural venues including the Royal Festival Hall, Kings Place, Wilton’s Music Hall, the British Library and the Sam Wanamaker Theatre at Shakespeare’s Globe.