NVAP screening of Death of a Salesman 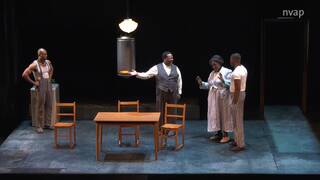 Join us for a free screening of Death of a Salesman, written by Arthur Miller. This production was directed by Marianne Elliott and Miranda Cromwell and recorded live by the V&A at the Young Vic in July 2019.

Elliott and Cromwell bring an innovative vision to one of the greatest plays of the 20th century, set through the eyes of an African American family, with exceptional performances led by Sharon D. Clarke and Wendell Pierce. There will be 1 interval, around 10 minutes long. Act 1 is 76 minutes long; Act 2 is 92 minutes long. All screenings are drop in and are on a first come, first served basis. Please be advised, screenings may contain explicit language and content. Our full list of NVAP recordings can be found on the Archives page.