Join us for a special screening of Joe Orton’s black comedy Loot, recorded in 2009 for the National Video Archive of Performance. 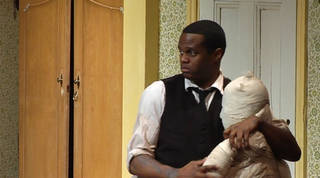 First performed in 1965, Joe Orton’s Loot was heavily censored before it was deemed fit for the stage, but is now seen as a masterpiece of black farce and morbid comedy.

Directed by Sean Holmes and recorded at the Tricycle Theatre on 28 January 2009 for the National Video Archive of Performance.