As part of the V&A Performance Festival 2018, discover objects which tell stories of censorship with curators across the Museum 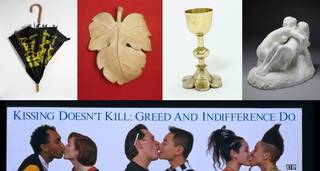 Tuesday 24 April: Sacred and Secret: Catholic worship in England after the Reformation
Led by Alexandra Jones

Friday 27 April: Rodin’s ‘Fantasies’: The censorship of same-sex desire as mythology in the 19th century
Led by Rebecca Knott

Duration of each talk: 20 minutes