It’s late afternoon on a summer’s day. As the vixen cub follows her mother into the woods the Forester makes his way home. Their paths cross, and they become entangled in a dramatic story of love, conflict, death and rebirth. 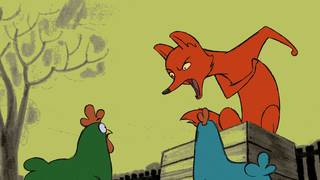 In this innovative and award-winning BBC animated film adaptation of Leoš Janáček’s The Cunning Little Vixen, we enter the long-ago and faraway world of Vixen Sharp Ears.

The composer, born in the village of Hukvaldy in Moravia, never lost his love of the region and its people, which he took inspiration from. The animation evokes the beauty of this landscape and a way of life in tune with nature’s cycles. The unforgettable heroine in probably the only opera inspired by an illustrated newspaper strip, is intelligent, mischievous and outspoken. Yet she is a predator and remains true to her animal nature.

Janáček’s sublime, lyrical score, arranged and conducted by Kent Nagano, is performed by the Deutsches Symphonie-Orchester Berlin. A cast of talented young professional singers, auditioned and selected by the European Opera Centre, voice the human and animal characters.

The screening will be introduced by animation director Geoff Dunbar, and followed by a Q&A session. Unfortunately the producer Rodney Wilson will no longer be able to join us on this occasion.

The animated version of The Cunning Little Vixen was commissioned by BBC Television and co-produced with Opus Arte and Los Angeles Opera in co-operation with the European Opera Centre.