In celebration of the landmark exhibition The Future Starts Here, this inspirational four-part Future Series in collaboration with Propela will explore design futures from a breadth of perspectives - near, far, and speculative 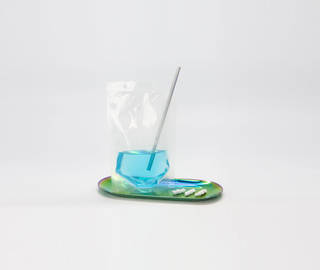 Joining us on the evening will be the ‘Grand Dame’ of Eating Experience and Food Revolutionary Marije Vogelzang; Professor of the Senses, experimental psychologist and neuroscientist Prof.Charles Spence and Sam Bompas of Bompas & Parr - the original enfant terribles of immersive food experiences.

“All my designs end up in the toilet” declares Marije Vogelzang who has been attributed to defining a whole new discipline of ‘eating-design’ through her performances, experiences, curation and objects. Driven by the multi-various issues surrounding the vast topic of ‘food’ - from food shortages to waste, allergies and obesity, Marije’s urgent mission is for designers to find solutions to these problems, and not to rely on industry to come to the rescue.

Her provocative, critical design-for-debate generates the kind of ideas you can’t ‘unsee’ or ‘untaste’. At the V&A Future Series, Marije will be discussing how breakthrough's in synthetic biology may pave the way for new delicious, edible, cruelty-free organisms. Think animals that come naturally 'smoked' season by ingesting volcano ash and the arrival of 'plant bones' on the menu. How can design shift perception of what we already have, instead of generating more stuff unnecessarily?
propela.co.uk/marije-vogelzang
marijevogelzang.nl
@marijevogelzang

Professor Charles Spence is a multi-award winning expert in the field of multi-sensory perception and neuroscience-inspired design. He founded the Crossmodal Research Laboratory at Oxford University bringing together an interdisciplinary team of psychologists, designers, sensory scientists, chefs, composers and marketers, who apply neuroscientific insights to sensorially-stimulating consumer product designs and services.

It was through Heston Blumenthal’s collaborations with Spence (2002 onwards) that The Fat Duck’s infamous Sound of the Seadish materialised. At the V&A Future Series, Charles will be discussing the forthcoming ‘Sonic Seasoning’ revolution; the repositioning of ubiquitous technologies like mobile devices and smartphones to enhance the dining experience; and the developmental process behind the world’s first Gastrophysics Plateware range, unveiled at this year’s Milan Design Week.
propela.co.uk/charles-spence
psy.ox.ac.uk/team/charles-spence
@xmodal

From inhalable gin clouds to multi-sensory fireworks, architectural jelly to DNA-based dinners, Bompas & Parr is a studio that continually generates world-firsts and has helped shaped the world of multi-sensory experience design as we know it. Founded by Sam Bompas and Harry Parr, the multi-disciplinary studio comprises cooks and structural engineers, film-makers and psychologists to create installations, experiences and artworks that lead the cultural conversation.

At the V&A Future Series, among other topics Bompas & Parr will explore a future where your meal 'talks back' to you through wearable tech and genetic Modification shakes off its stigma, perceived instead as a creative tool for generating fantasy, or near impossible foods. Imagine if you will an extinct woolly mammoth back on the menu? Or a beer flavoured with the microorganism inhabitants of Roald Dahl?
bompasandparr.com
@BompasandParr

This event is presented in collaboration with Propela, the speaking agency for creatives crafting your future.