Discover the story behind the Hall as it marks its 150th anniversary. 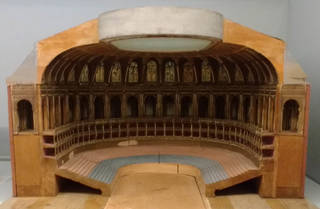 This display, supported by the Royal Albert Hall, explores the fascinating story of the Hall’s design through a variety of historic models, photographs and casts as 2017 marks the 150th anniversary of the Hall’s creation. These include a magnificent model of an early proposal for the hall presented to Queen Victoria in 1865, as well as models of alternatives for its external appearance.

On 20 May 1867 Queen Victoria arrived in South Kensington to lay the foundation stone of the Royal Albert Hall. Although this marked the beginning of the construction work, the architectural and ornamental design of the hall was still in flux.