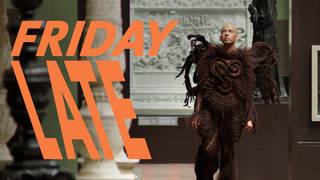 In this short film shot in the museum’s empty galleries, artist Amartey Golding turns to his Anglo-Scottish and Ghanian ancestry, by way of a Rastafarian upbringing, to explore the universal aspects of human behaviour. The work features Amartey’s long-time collaborator Darren Gayle and centres on an elemental being played by Amartey's brother and muse, Solomon Golding – the first Black British male to join the Royal Ballet Company. Solomon wears an ornate hand knotted garment made of human hair that has been braided with reference to Afro hair styles and the body art of the ancient Britons. ‘Bring Me To Heal’ draws in ancient histories, myth, storytelling and craft to examine our more destructive behaviours as well as the cultures which emerge from and perpetuate them.

Amartey Golding was born in London in 1988 to an Anglo-Scottish mother, Ghanaian father and Jamaican stepfather. His creative practice spans chainmail making, upholstery, film, photography, ballet and fashion. Golding’s work documents his introspective process of identifying and understanding the unifying primal themes of humanity and exploring the seemingly contradictory fabric of human existence.