Did the creation of Lovers Rock as music for women, challenge or uphold stereotypical views of Black women, their presence, resistance, and contribution in Britain? 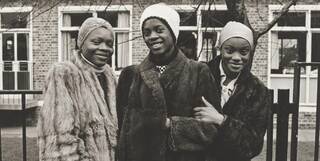 Discover more about this first sub-genre of Reggae created outside of Jamaica. Join the debate and examine how the atrocities of chattel enslavement for Black men and women in the Caribbean have played a part in how they are represented in modern music. How has Reggae – in all its forms – responded to the colonial view of Black heterosexuality and romance? How does misrepresentation find its way into musical forms created by and for Black people, and how aligned are these to colonial teaching, socialisation, and power practices?

Share your views, memories and lived experiences, and reminisce on your personal recollections as invested fans and curious music lovers. Explore Black music, and representations of transatlantic enslavement held within the V&A’s collections.

Stella Dadzie, a published writer, and feminist historian, best known for The Heart of the Race: Black Women’s Lives in Britain which won the 1985 Martin Luther King Award for Literature and was re-published by Verso in 2018 as a Feminist Classic. Her latest book A Kick in the Belly: Women, Slavery & Resistance was published by Verso in October 2020 to much acclaim. She is a founder of member of OWAAD (Organisation of Women of African and Asian Descent), a national umbrella group for Black Women that emerged in the late 1970s as part of the British Civil Rights movement. Stella was recently described as one of the ‘’grandmothers’’ of Black Feminism in the UK, and her personal archive housed at Black Cultural Archives in Brixton, is one of the most visited by researchers and scholars from all over the world.

Dr Lisa Amanda Palmer, an Associate Professor and the Interim Director of the Stephen Lawrence Research Centre at De Montfort University, Leicester. Lisa is a qualified librarian and previously worked for Birmingham Libraries and Archive Services. She has a keen interest in working with local archive collections, specifically, the Vanley Burke Archive held at the Library of Birmingham. Her research focuses on Black feminism, Black cultural politics and the intersection of race, racism, gender, and sexuality. Her writing covers a broad spectrum of fields including the gendered politics of lovers’ rock music, the production of local community archives and the misogynoir faced by Black women in British public life. She is the co-author of the book Blackness in Britain (Routledge 2016) and is currently writing her book on Black women in the UK’s lover’s rock reggae scene.