NVAP screening of Ubu and the Truth Commission 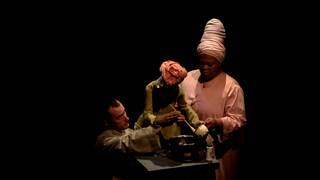 Join us for a free screening of Ubu and the Truth Commission written by Jane Taylor and William Kentridge and was directed by William Kentridge. This production was recorded live by the V&A at the Coronet, Notting Hill, November 2015.

William Kentridge (who currently has a major retrospective on at the RA) directs this ambitious play using every theatrical form at his disposal. Juxtaposing shocking testimony via puppets by Handspring (War Horse), live action and animation, combining satire, verbatim, fiction and documentary, Kentridge's Ubu packs a powerful punch. There will be no interval for this production. The production is 85 minutes long. All screenings are drop in and are on a first come, first served basis. Please be advised, screenings may contain explicit language and content. Our full list of NVAP recordings can be found on the Archives page.