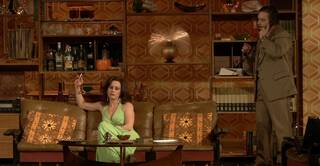 Join us for a free screening of Abigail’s Party, written by Mike Leigh. This production was directed by Lindsay Posner and recorded live by the V&A at Wyndham’s Theatre in July 2012. The enduring play analyses notions of the English class and society through a suburban drinks party, revealing the complex relationships between neighbours, within families, and across society. There will be 1 interval, around 15 minutes. All screenings are drop in and are on a first come, first served basis. Please be advised, screenings may contain explicit language and content. Our full list of NVAP recordings can be found on the Archives page.