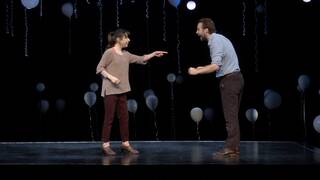 Join us for a free screening of Constellations, written by Nick Payne. This production was directed by Michael Longhurst and recorded live by the V&A at the Duke of York’s Theatre in January 2013.

This was the theatrical debut of the play, starring Sally Hawkins and Rafe Spall. It tells a stellar story of love and friendship, mapping it across the universe yet grounded to the realities of life. There is no interval for this production. The production is 71 minutes long. All screenings are drop in and are on a first come, first served basis. Please be advised, screenings may contain explicit language and content. Our full list of NVAP recordings can be found on the Archives page.