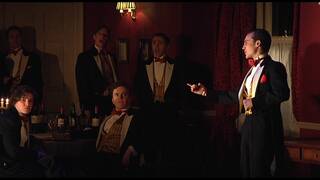 Join us for a free screening of Posh, written by Laura Wade. This production was directed by Lyndsey Turner and recorded live by the V&A at the Royal Court Theatre (Jerwood Theatre Downstairs) in May 2010.

A play both of, and ahead of its time, modelled on the infamous Bullingdon Club, Posh follows the members of the fictitious Riot Club and their overprivileged antics at an increasingly horrific meeting, highlighting how rules can evade the elite. The screening will include 1 interval, around 20 minutes long. All screenings are drop in and are on a first come, first served basis. Please be advised, screenings may contain explicit language and content. Our full list of NVAP recordings can be found on the Archives page.