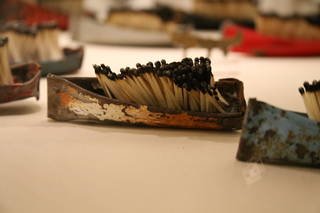 In the sixth year since the Syrian uprising, poet Ruth Padel joins artist Issam Kourbaj in conversation, exploring the arrival of thousands of refugees on the Greek island of Lesbos, fleeing the violence of Syria. Padel will discuss her visit to Lesbos and read a poem inspired by meeting the islanders and refugees, while Kourbaj will talk about his artwork inspired by 5th-century BC Syrian boats, and his work on the continuing tragedies of his homeland.

Padel and Kourbaj will be joined in conversation by curator Louisa Macmillan. Kourbaj’s artwork Dark Water, Burning World will be on display in Gallery 47c (outside the Jameel Gallery) on Wednesday 21 June.