Since 2015, the V&A has staged an annual special project at the Pavilion of Applied Arts in the Arsenale, in partnership with La Biennale di Venezia. The 2019 edition features an installation by Polish-born, London-based artist, Marysia Lewandowska, whose work explores the public function of archives, museums and exhibitions.

For this commission, curated by Ralph Rugoff, overall Director of the Venice Art Biennale (as well as the Hayward Gallery in London), Lewandowska gained access to the rich holdings of the V&A's archive at Blythe House in West London, and The Historical Archives of Contemporary Arts in Venice, which houses the Biennale's documentary assets.

"I was getting a bit concerned because there were thousands of boxes, and everything was interesting, but what was I going to do with this overwhelming amount of material?" Lewandowska says of her visit to Blythe House. "Then I was taken into another store, and when we walked in, I noticed an incredible drop in temperature". The climate-controlled room contained cans of celluloid that turned out not to be in the inventory: "my body detecting this change, alerted me to the presence of film footage", she adds.

For the installation, Lewandowska decided to include her serendipitous discovery of these cinematic negatives in a new work titled It's About Time. She selected every tenth roll, out of the total of 103, and then chose another ten at random.

Many of the rolls turned out to contain rushes of a documentary film about the V&A, 'Museum at Work', made by the BBC in 1978. Sir Roy Strong, then Director of the Museum, is shown chairing a meeting in the Boardroom, dominated by smoking men who are inspecting an architectural model of an exhibition design. Another cannister contained silent footage of two women preparing a mannequin in period costume for a photograph, adjusting the dress so that it could be shot against a roll of pink background paper.

As visitors enter the Pavilion of Applied Arts, they hear the sound of people entering the V&A, audio that Lewandowska recorded at the museum's Grand Entrance. Footage of the V&A's revolving door, taken from the 1978 rushes, is projected onto a PVC screen composed of strips that resemble film. On another screen is a clip from the 1976 Venice Biennale, depicting a drinks reception in the Giardini.

The two institutions are brought into a conversation in the main space of the Pavilion, a room that is divided by an elegant padded screen structure designed by architects Studio Abroad, arranged in an S-shape. In one of the two enclaves this creates, you see Lewandowska's film, edited from the rushes discovered in the V&A's archive, accompanied by a soundtrack composed by Luca Nasciuti. The other contains an audio recording of a debate between several Italian women, discussing the important role they played in the founding of the international exhibition of 1895, which came to be known as La Biennale di Venezia. This soundtrack seems to reference Lewandowska's Women's Audio Archive (1983 – 1990), which contains over 200 hours of her recordings with female practitioners in private conversations and public events.

Lewandowska's collaborative work explores themes of representation and gender, and questions the political and social mechanisms responsible for shaping the cultural spaces of the exhibition and the museum. It's About Time uses archival documents as source material to rewrite history to foreground and credit those so often overlooked in the official records, to create an 'alternative past' that allows the 'unheard voices' of women to emerge. 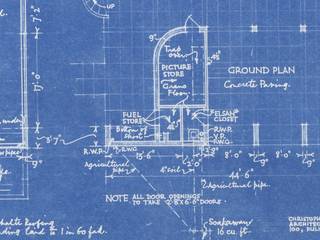