Standard flat plywood boards cannot be moulded into curved shapes. To form curved plywood, glue is spread over layers of thin, cross-grained veneers which are placed in a mould. Pressure is then applied to hold the veneers together in the desired shape while the glue sets. Depending on the type of glue used, the mould may need to be heated. Once the glue has set and the cross grained veneers have been joined as a single shape, the material becomes plywood.

This film shows a contemporary version of Marcel Breuer’s Short Chair being made at the Isokon Plus workshop, London. A two part (concave and convex) mould is used to form the chair’s seat. Glued, cross-grained veneers are laid between the two parts which are then held together under pressure in a press. Once the glue has set, the seat is removed from the mould, ready for trimming and finishing. 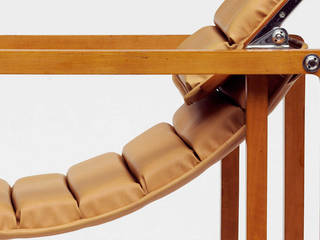