Robert Adam (1728 – 92) was one of the most important British architects working in the Neoclassical style – a movement in the decorative and visual arts that drew inspiration from the 'classical' art and culture of Ancient Greece and Rome.

Born in Kirkaldy, Scotland, Robert Adam was the son of the established architect William Adam (1689 – 1748), and followed him into the family practice. In 1754 he embarked on a Grand Tour, spending five years in France and Italy visiting classical sites and studying architecture under the French draughtsman Charles-Louis Clérisseau and Italian artist Giovanni Battista Piranesi. On his return, Adam established his own practice in London with his brother James. Although classical architecture was already becoming popular, Adam developed a distinctive and highly individual style which was applied to all elements of interior decoration, from ceilings, walls and floors to furniture, silver and ceramics. The 'Adam Style', as it became known, was enormously popular and had a lasting influence on British architecture and interior design.

Letters from Adam whilst in Italy in 1757 show that he had decided to become the most prominent architect in Britain. This was a normal aspiration for a young British architect on the Grand Tour, but Adam was unusual in wanting to bring to Britain what he called the "one true grand and simple style". Unlike many of his contemporaries, Adam did not have a ready-made network of noble friends and relations and was too busy learning to draw to make the contacts that would provide clients for his future practice. But what he lacked in contacts, Adam made up for in drive and determination, combined with a plenty of luck.

On his return to Britain in 1758, Adam was invited to Kedleston Hall, having impressed its owner, Lord Scarsdale, with his Italian drawings. It was here that Scarsdale was having a house constructed and James Stuart, another pioneer of Neoclassicism, was working on the interiors. Adam was able to get Stuart dismissed from the project by attacking his Neoclassical designs as "so excessively and ridiculously bad they beggared all description", and went on to complete the house himself. Adam's Scottish origins also played a crucial part in helping him to become appointed by many prestigious clients. Lord Bute, a fellow Scot and minister of King George III, aided Adam in being appointed as royal architect, together with William Chambers.

Adam's own theory of design was based on the principle of 'movement' – the rise and fall, and advancement and recession of forms. The essence of the 'Adam Style' lay in his use of ornament. Looking back in 1812, English architect, Sir John Soane refers to the Adam Style as "...light and fanciful...This taste soon became general; everything was Adamitic".

Another crucial element was his insistence on a stylistic coherence across every element of his interiors. The idea of coordinated design had become widespread in Britain – encouraged by the relative ease with which repetitious and regular Neoclassical ornament could be produced in flat patterns or in low relief which could be easily fitted together in different combinations.

The Adam brothers' lavish publication, Works in Architecture, published in parts from 1773, played a significant role in the dissemination of their style and included illustrations encouraging the idea of the total interior. Its characteristically boastful text, which credited the complete change in national taste to the Adam brothers, established their reputation for the future. In it they stated that Graeco-Roman examples should "serve as models which we should imitate, and as standards by which we ought to judge".

Adam's version of the Neoclassical set off a revolution in style. His distinctive decorative system used a limited range of ornament, brilliantly distilled from ancient and Renaissance sources, chiefly wall paintings and room decorations. By the early 1760s, Adam had developed a form of interior decoration that sought to suggest the rooms of the ancients, but adapted to modern uses. Ceilings and walls, and often floors, were covered with continuous areas of small-scale ornament, which played down architectural definition.

Neoclassicism took about ten years to spread beyond the fashionable elite. By the early 1770s full-blown neo-classical furniture had penetrated the general market, and in 1774, the architect John Carter could describe a pair of Adam-style panels shown in the Builder's Magazine as being "in the present reigning taste". 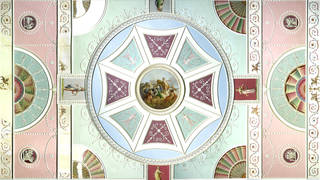