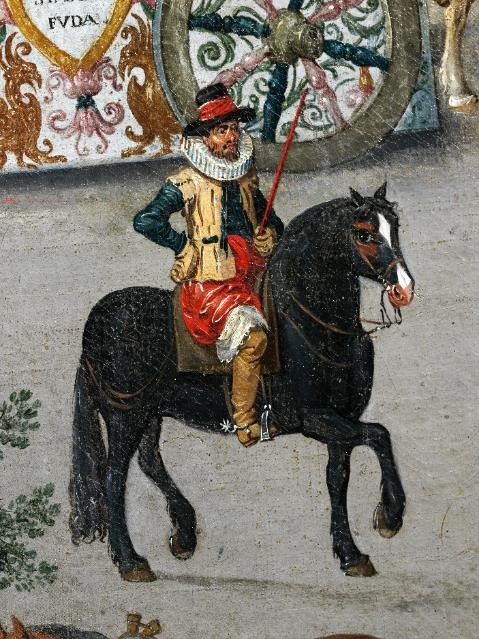 2015 is the 400th anniversary of the ‘Triumph of Archduchess Isabella’ in the Brussels Ommegang, which took place on 31st May 1615.

To record the 1615 Ommegang, Isabella commissioned the artist Denys van Alsloot to produce six paintings depicting the entire procession. Only four of the original six survive, two being in the Prado in Madrid and two in the Victoria and Albert Museum, V&A 5928-1859 and 168 & 169-1885 – the second of which was divided in half at an unknown date.

As Liz noted yesterday, the intact V&A painting is one of the ‘star’ objects going into the Europe Galleries. Last year I took advantage of some wonderful new photographs of the painting and blogged about it in some detail here.

To celebrate the 400th anniversary of this Ommegang, a symbolic occasion of civic union and city wide performance, the 12 Star Gallery and the V&A’s Theatre and Performance Department organised an audio-visual display at Europe House. ‘1615: Power, politics and performance at the heart of Europe’ opened on 22nd July and yesterday’s post from Liz has prompted me to give warning that this display is due to close very soon, on 11th September.

The display has meant that, whilst awaiting the opening of the Europe Galleries, it has been possible to take a close look at an impressive digital reproduction of the painting alongside reproductions of the rest of the surviving series. The high-quality digital images of all the paintings were produced in conjunction with Advanced Imaging Laboratory of Kyoto University.

The Europe Galleries will feature a custom-made interactive that allows visitors to closely explore the painting on display – both in terms of visually zooming in on the painting and also being provided with more information about its different elements. I’m afraid I can’t currently give away much more than this, apart from to say that trials of the prototype have been greeted with a lot of enthusiasm …

The current display at Europe House includes a different 9 minute animated film (animation by Paul Barritt) which considers the series of paintings in a different manner and includes footage of the 2015 Ommegang.

Rather than ignite a sense of competitiveness, seeing the different ways Denys van Alsloot’s paintings of the Ommegang have been received and interpreted instead highlight the varying possibilities and inspiration they offer. This is similar to the two different pitches made for the Ommegang painting during the pitching sessions for the V&A’s A History of an Object in 100 Worlds (one and two). Personally, I’m looking forward to hearing a variety of visitor responses to our painting (and the interactive) once the galleries open.

12 Star Gallery
The 12 Star Gallery is located at Europe House, 32 Smith Square, London SW1P 3EU and shows work which celebrates the creativity and cultural diversity that is the hallmark of the European Union. The gallery is open from 10am-6pm, Monday to Friday.