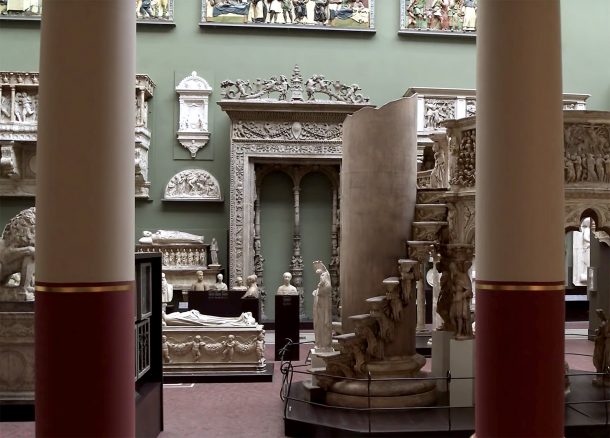 The wait is very nearly over, and from tomorrow the Cast Courts will re-open to the public, marking the end of nearly a decade of curatorial planning, conservation, building and re-interpretation work. These iconic double-height galleries remain the only public galleries in the V&A to have the same purpose since they first opened to the public in 1873, and display an encyclopaedic sourcebook of casts, copies and electrotypes amassed over more than 150 years. The Builder magazine compared the first sight of these dramatic galleries to a glimpse of Mont Blanc, creating one of those ‘impressions that can scarcely be effaced’, and they still very much have this effect today.

Today, the V&A’s collection of casts is one of the few surviving worldwide. Many others – thought to be lacking in value – were discarded by museums across the globe. This makes our collection all the more valuable. And even more so when we consider their greater significance – truthful records of originals that have suffered at the hands of tourism, over-zealous restoration, pollution, or even destruction through warfare. Some of our copies even now exist where the original does not.

The first phase of the FuturePlan project unveiled Renaissance glories in the Weston Cast Court, named in recognition of support from the Garfield Weston Foundation. Since then, the Courts have undergone further redevelopment and if you have visited the museum over the last three years you may have spotted the maze of scaffolding and hive of activity on the other side of the courts. This gallery has now been named ‘The Ruddock Family Cast Court’ in recognition of their generous support, and from tomorrow this gallery will once more be accessible by visitors. The original 19th-century wall colour has been faithfully restored, as have the original ceramic tiled floors made in Stoke-on-Trent. In addition, we’ve replaced the glazed roof panels, improved the lighting, and all the objects have been carefully cleaned and conserved by the phenomenal efforts of the V&A conservation team, led by Head of Sculpture Conservation Charlotte Hubbard. And, perhaps most excitingly, for the first time the base of Trajan’s Column- the largest object in the museum- has been permanently opened up, allowing visitors to step inside and marvel at its construction.

Also opening tomorrow is The Chitra Nirmal Sethia Gallery, a brand-new gallery space exploring the history, significance, and contemporary relevance of casts. Visitors to these spaces will be able to explore the history and processes of plaster casting and electrotyping, gain an insight into their technology and production, and better understand new methods of replication being developed in our digital age.

Just like our Victorian counterparts before us, these theatrical galleries – now so wonderfully restored – still take us to faraway places, showing us monuments and sculptures we might never have seen, certainly never next to each other. And now, alongside our full-scale reproductions of Michelangelo’s gigantic figure of David and the 12th century Romanesque Pórtico de la Gloria from the famous Spanish pilgrimage site of Santiago de Compostela, these galleries also house digital copies: including a CNC-milled limestone copy of a grave slab from Kala Koraysh in remote Dagestan, alongside a scaled-down 3D printed reproduction of an arch from Palmyra, destroyed by ISIS in 2016. These were both acquired to mark the launch of the Reproduction of Art and Cultural Heritage (ReACH) Declaration in 2017 – a 21st century reworking of Henry Cole’s 1867 International Convention. Both documents will be displayed in our new interpretation gallery.

Owing to the scale and complexity of these fascinating objects, this project has truly been a collaborative endeavour and has involved colleagues from Collections, Interpretation, Projects, Estates, Conservation to name but a few. Particular thanks go to the Technical Services department whose expert knowledge has ensured that these objects are mounted and displayed beautifully throughout the galleries. Moreover, the project’s reach has extended even further in the last few weeks with colleagues from nearly every department in the museum coming to help dust the galleries and prepare them for opening. Huge thanks to everyone who volunteered to help out. 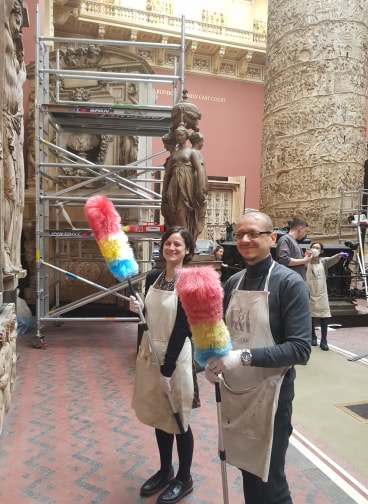 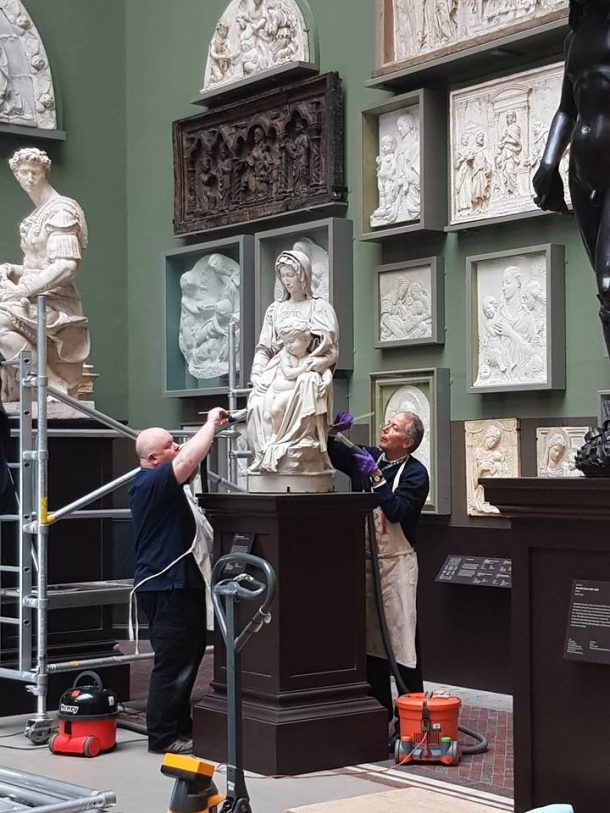 These galleries are one of the strongest embodiments of the museum’s founding mission as a home of art education and inspiration, and we hope that you will once again enjoy visiting these awe-inspiring spaces and marvel at the complexity of the objects on display. Three publications have been launched to mark the opening, Copy Culture: Sharing in the Age of Reproduction edited by Brendan Cormier is out now, and the V&A will soon be publishing ‘The Cast Courts’ edited by Angus Patterson and Holly Trusted, and ‘The Museum and the Factory’ by Angus Patterson and Alistair Grant, and these will all shortly be available to buy in the V&A shop. We also have a series of talks and lectures happening over the next few months, please see below for more information.

To find out more information and to buy tickets please see here.

24 January 2019- Mariam Sonntag – The Conservation of the Tabernacle

Angus Patterson – 13 March 2019 – ‘Replicating the Past: How Modern Approaches to Reproduction are Rooted in the 19th Century’

I’ve been following with great interest your reporting on the work to restore the Cast Courts. My late father was assistant manager of the Supply of Casts Department in November 1932; I have a copy of the Works and Warding Staff list for that date when the Museum Superintendent was JP Willcock. My father worked at the V&A from 1929 until 1934 when he was made redundant. Among his papers was a copy of a letter of 1867 from D Brocciani to Henry Cole claiming additional expenses and covering a fascinating report of his voyage to Santiago and what was involved in obtaining a reproduction of the Porta Della Gloria of the Cathedral. I also have some photographs of my father and his staff at work in moving reproductions. I look forward to coming to see the reproductions for myself in the next few months.