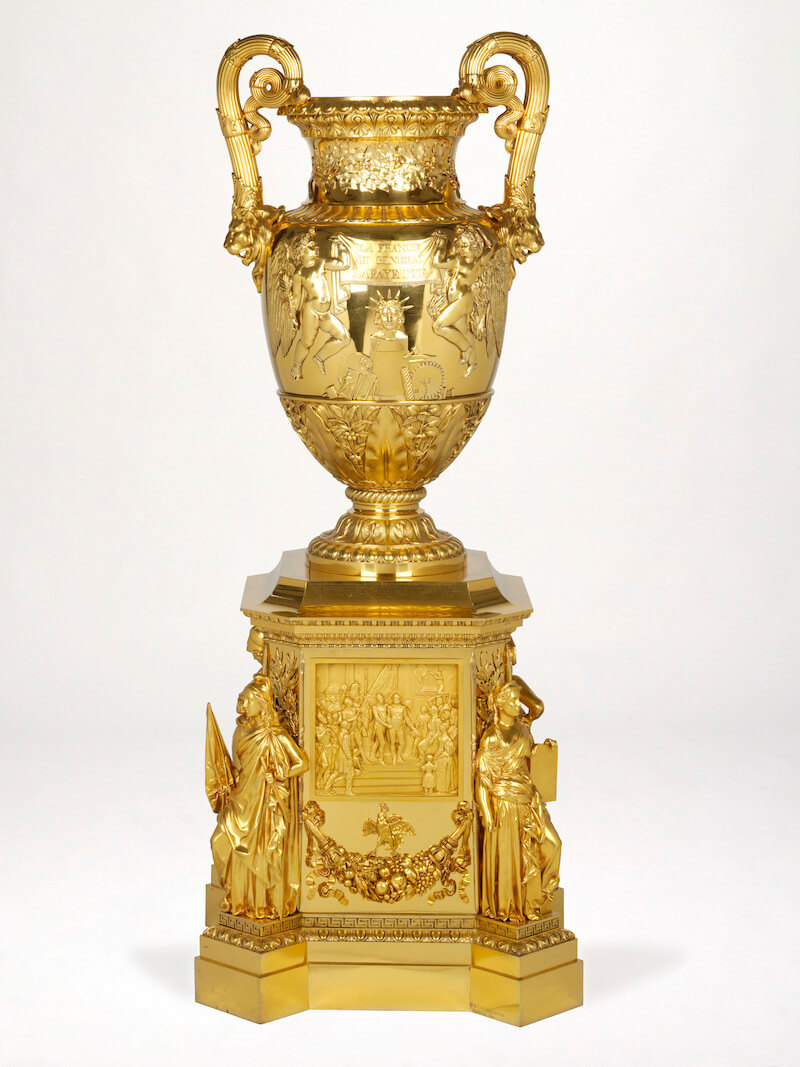 After listening avidly to the soundtrack of the multi-award winning musical Hamilton: An American Musical, one of my colleagues discovered a surprising link between the much anticipated show (soon to be opening at the West End!) and one of the most extravagant and monumental treasures in the Rosalinde and Arthur Gilbert Collection on loan to the V&A.

Standing at 1.05 metres tall and gleaming with golden heroic imagery, the Lafayette vase championed the achievements of the French General, Gilbert du Motier Marquis de Lafayette. Played by Daveed Diggs in Act 1 of Hamilton, Lafayette was an ardent supporter of Alexander Hamilton, whose compelling life story is retold in the musical. Hamilton was one of America’s Founding Fathers and first secretary of the treasury, and is played by Lin-Manuel Miranda who also wrote the musical.

So why was Lafayette commemorated in such an extraordinary way, both in gold and on Broadway?

At the young age of 19, the aristocrat Lafayette was made a Senior General and quickly became a renowned military leader in France. He was an important figure in both the French and American Revolutionary Wars, sympathising with the Americans and their fight for independence. Lafayette resolutely believed in freedom for all men and was instrumental in the abolition of slavery in France and ultimately in America.

Against the wishes of Louis XVI of France, Lafayette sailed to America in 1777, where he established a close friendship with Alexander Hamilton. Lafayette also worked alongside Thomas Jefferson to write the Declaration of the Rights of Man and of the Citizen. However, Lafayette’s support of constitutional monarchy made him neither fully radical nor royalist, which eventually resulted in his arrest in Austria in 1792. Once the absolute monarchy in France had been ‘suspended’, he was deemed a traitor by radicals. Lafayette was then conversely deemed a traitor to the French monarchy by the emperor of Austria, who held Lafayette personally responsible for the execution of Louis XVI. Imprisoned for five years, Lafayette was finally released under Napoleon’s orders and hailed by France and America as “the hero of the two worlds”.

Lafayette’s relationship with America was not just political; he had a lifelong friendship with the General George Washington, who later became the first President of the United States. As a testament to their friendship, Lafayette even named his son Georges Washington Lafayette. The bond between these influential men is recognised in the Gilbert Collection by Rosalinde and Arthur Gilbert who acquired an enamel portrait miniature of Washington in the same year as the Lafayette vase in 1980.

The Lafayette vase was commissioned in 1830 by the president of the Council of Ministers in France and was presented to Lafayette’s son Georges in 1835, following Lafayette’s death. It was designed by Jacques-Henri Fauconnier, made by Jean-Étienne Chaponnière, and is assembled from elements that were cast, hammered, chased and gilded.

Some of Lafayette’s greatest achievements are depicted on the base of the vase, surrounded by swags of fruit and oversized figures of Liberty, Equality, Strength, and Freedom. Underneath these scenes of triumph are the images of the French cockerel and the American eagle. One of the commemorative scenes illustrates the British general Cornwallis offering his sword to George Washington as a sign of surrender. This key moment in the American Revolutionary Wars occurred at the end of the Battle of Yorktown on 19th October 1781, in which both Lafayette and Hamilton played crucial roles. Although Hamilton is not depicted on the vase, he served in Lafayette’s Division as a commander of a light infantry battalion, leading the attack on the British at Yorktown. Following their defeat at this battle, the British were prompted to start negotiating an end to the conflict.

Lafayette’s and Hamilton’s bravery at Yorktown is most recently commemorated in the Hamilton musical, immortalised in the incredibly catchy and emotive rap song ‘Yorktown: The World Turned Upside Down’. Before bursting into the battle song, the characters Lafayette and Hamilton exchange a few words of encouragement, ending with the comment “Immigrants: we get the job done!”

It’s fascinating to see that the exact same debate raised throughout the Hamilton musical is still pertinent today and is so visible on the Lafayette vase; an object that was created nearly 200 years ago.

To read more about the Rosalinde and Arthur Gilbert Collection, take a look at the Gilbert Gems Blog page.