The V&A houses one of the world's great collections of Islamic art from the Middle East. We began to collect art from the Islamic world in the 1850s, and were the first institution in the world to do so with a purpose. This can be seen at its best in the splendid Jameel Gallery of Islamic Art.

The past achievements of the Islamic world in art, craft and design are reflected in the work of many contemporary practitioners.

The Jameel Prize was established by the V&A in 2009 and is run in partnership with Art Jameel. There have been five editions since the Prize began.

The Jameel Prize is open to artists and designers from any ethnic, religious or cultural background.

Sign up to be the first to hear about Jameel Prize news. 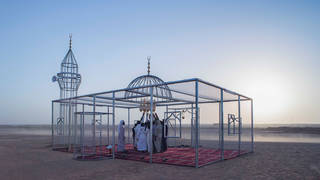 The sixth edition of the Jameel Prize is devoted to contemporary design inspired by Islamic tradition. Jameel Prize: Poetry to Politics showcases the work of eight designers from India, Iran, Lebanon, Pakistan, Saudi Arabia, the UAE and the UK.

The exhibition is open to the public from 18 September – 28 November 2021, and will then tour internationally. Visit the V&A to explore the work of our eight finalists, including our winner, Ajlan Gharem.

The artist Mehdi Moutashar and the architect Marina Tabassum were announced as joint winners of the £25,000 Jameel Prize 5. This is the first time the prize has been awarded to two finalists. Mehdi received the award for his four bold works of minimalist abstraction rooted in Islamic geometry, and Marina for her visionary Bait ur Rouf mosque built in 2012 in Dhaka, Bangladesh. 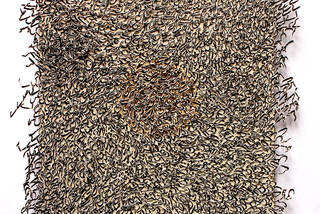 Ghulam Mohammad was announced as the winner of Jameel Prize 4 for his five works of paper collage, four Untitled and one with the title Gunjaan (2014) on 7 June 2016. Ayşe and Ece Ege, founders of Turkish fashion label Dice Kayek and winners of Jameel Prize 3, presented Ghulam Mohammad with the Prize at a ceremony at the Pera Museum, Istanbul. The judges felt that Ghulam Mohammad’s work stood out for its excellence of concept and execution. 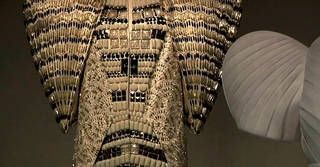 Dice Kayek were announced as the winners of Jameel Prize 3 for Istanbul Contrast, a collection of garments that evoked Istanbul’s architectural and artistic heritage. The judges felt that Dice Kayek's work demonstrated how vibrant and creative Islamic traditions continue to be today. 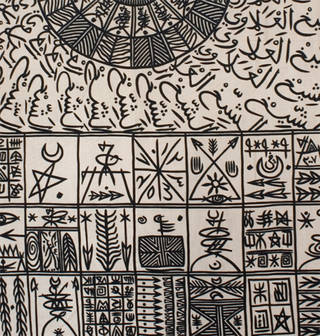 Rachid Koraïchi was announced as the winner of the Jameel Prize 2011 for a selection of embroidered cloth banners from a series entitled Les Maitres invisibles. The Judges felt that Rachid's work matches the aims of the Jameel Prize through its qualities of design and reliance on traditional craft. 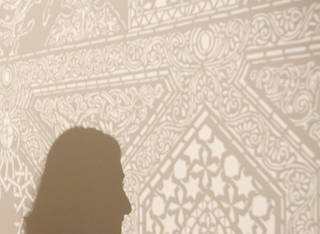 Afruz Amighi was announced as the winner of the Jameel Prize 2009 for 1001 Pages from a series of shadowpieces. Amighi uses light and shadow to create complex and engaging designs using a stencil burner to hand-cut the design from a thin, porous sheet of plastic – a material used in the construction of refugee tents.

In partnership with Art Jameel