Cabbage Patch Kids were invented by the American art student Xavier Roberts in the late 1970s. They started off as ‘Little People’ with sculpted heads and bodies. Roberts experimented with a process called needle sculpture to make the dolls. The process is similar to quilting and can give a doll more texture and shape. In 1982 American company Original Appalachian Artworks started to mass produce the dolls with vinyl heads and soft fabric bodies. 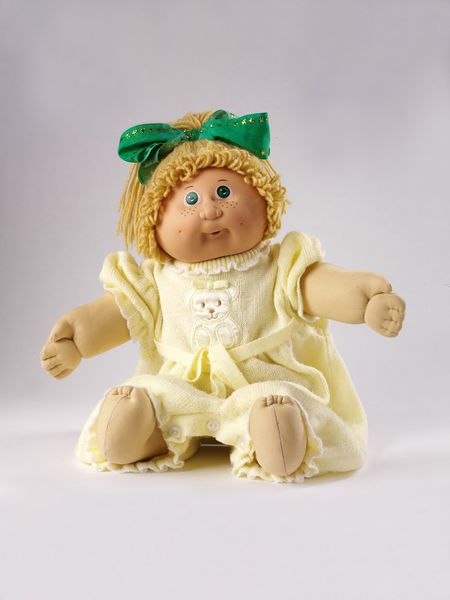 Each Cabbage Patch Kid was unique with different hair or eye colours, different outfits and each had a different name on their birth certificates. They were marketed as dolls which needed adopting – instead of buying a Cabbage Patch Kid you were simply paying the adoption fees. The dolls were instantly popular. By the end of 1983 more than three million had been sold and a few years later a Cabbage Patch Kid even went into space. In 1985 a series of trading cards known as the Garbage Pail Kids were issued by the American company Topps. These cards featured caricatures of the Cabbage Patch Kids, with suitably gross names such as Up Chuck and Sicky Vicky. The cards were so popular that The Garbage Pail Kids Movie was released in 1987. Original Appalachian Artworks later sued the Topps company for violating the Cabbage Patch Kids trademark which led to the cards being discontinued by the end of the 1980s.