Professor Sir Keppel Archibald Cameron Creswell (1879 – 1974), a pioneer in the scholarship of medieval Islamic architectural history, was among the first to use photography in the Middle East as an essential part of recording historic sites and buildings. His photographs represent a unique account on the cities and their medieval monuments.

Creswell was born and educated in London. He travelled extensively in the Middle East during World War I, serving in the Royal Flying Corps in Egypt and as Inspector of Monuments in Syria and Palestine in Edmund Allenby's military administration of Occupied Enemy Territory. This gave him the opportunity to travel and document sites along the way. Returning to Egypt in 1920, he decided to settle there and began a life-long mission to photograph, catalogue and study the Islamic architecture of Egypt and much of the Middle East.

Creswell took his photographs (at least as early as 1916) to accompany his architectural drawings and texts, which were later published in his multi-volume works Early Muslim Architecture (1932) and The Muslim Architecture of Egypt (1952). Today, these monumental books are considered foundational reference works for the architecture of the first two centuries of Islam and five centuries of Egyptian architecture, with the last published monument dating to 1326. Aside from these well-known publications, Creswell's legacy also includes a remarkable photographic archive, today housed in six international collections, including the V&A. This archive features hundreds of unpublished views of Egyptian monuments built in the late Mamluk (15th century) and early Ottoman periods (16th century). Since 1975, Creswell's collection of negatives has resided at the Ashmolean Museum of Art and Archaeology at Oxford University.

Noticing at an early stage Creswell's expertise in the subject of Islamic architecture, as well as his timely access to monuments across the Middle East, the V&A became the first public collection to acquire Creswell's photographs. In September 1920, two months after he was demobilised from the Army, Creswell wrote to the Museum's Art Library offering a set of 2,600 architectural photographs of Islamic architecture. The purchase was agreed and the Library confirmed the order on 26 November 1920. The majority of the views are of Egypt, but the collection also includes views of Syria, Palestine, Jordan, Iraq, Tunisia and Turkey. Creswell's relationship with the V&A continued throughout his lifetime and subsequent smaller acquisitions of photographs followed in 1926, 1927, 1929, 1930 and 1939. The V&A holds 3,374 prints, which have been researched and systematically catalogued with funding from the Barakat Trust. Within the wider context of the V&A's remarkable photographic collections, Creswell's images sit with those of several other photographers working in the region, such as Pascal Sebah (1823 – 86), Felix Bonfils (1831 – 85) and Gabriel Lekegian (1850s – 1920s).

With great attention to detail, Creswell developed and printed many of the photographs himself. In the introduction to The Muslim Architecture of Egypt he describes his equipment in detail and explains his methodology. This confirms the personal pride he took in his photographic 'arsenal' as he called it. Working to great lengths to achieve the specific views he wanted, Creswell was a stickler for perspective, climbing roofs and minarets to take very high views, as his assistant Christel Kessler recalls.

Creswell taught at Fuad I (later Cairo) University from 1934 until 1951. The University of Oxford and Princeton University conferred honorary doctorates in 1946 and 1947, the same year he was also elected a Fellow of the British Academy. In 1956 The American University in Cairo (AUC) purchased his unrivalled reference library and he joined AUC as a distinguished professor and curator of his library until shortly before his death in 1974. He was knighted in 1970.

Today, a century after his research began, Creswell's books and photographs remain a major resource for the study of Islamic architecture. Although his approach was criticised for its disinterest in social and historical context, his publications are still valued by scholars, offering one of the most important and complete primary resources on early Islamic architecture. His photographs are highly significant as they have preserved architectural features and elements that in many cases have since vanished or been altered. Crucially for heritage conservation in the modern Middle East, Creswell's photographs allow us to compare the present state of the monuments with their appearance in the first decades of the 20th century.

This project is supported by the Barakat Trust. 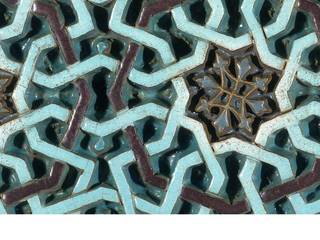 Visit the shop
Background image: The wooden screen at the entrance of female mausoleum at funerary khanqah of Mamluk Sultan Faraj b. Barquq, built in Cairo in 1400 – 11. The inscription panel in the frame of the door’s opening was looted in 2016.