Designer Madeleine Vionnet (1876 – 1975) was one of Europe's greatest couturiers, famous for pioneering the revolutionary 'bias-cut' dress, draped expertly over the body, which changed the shape of women's fashion.

Born in Chilleurs-aux-Bois, France, Vionnet worked as a lacemaker's apprentice from the age of 12. Fleeing her underprivileged upbringing and an unhappy marriage, she travelled to London and found a job as a dress-fitter with couturier Kate Reilly, around 1897. With her new knowledge, she was determined to become a dressmaker, and returned to Paris in 1900, where she worked for the prestigious couture houses Callot Soeurs and Douçet. She opened her own house on the Rue de Rivoli under the name 'Vionnet' in 1912.

The couture house was forced to close during the First World War, but Vionnet re-opened in 1918, moving to larger premises on 50 Avenue Matignon, Paris. She experimented intensively with fabrics, often letting them dictate the shape or the effect of a garment. In the early 1920s, her couture house became known for championing the bias-cut, a technique of cutting across the grain of a textile to produce a carefully draped silhouette which clung naturally to the body.

Vionnet's chic, free-flowing garments flattered the curves and forms of the female body, encouraging women to go without cumbersome corsets. A master geometrician, her bias-cut garments may appear simple, but their cut and construction are in fact complex, and always immaculately executed.

Vionnet was also highly regarded for her preoccupation with the minute details and finishing techniques of dressmaking. Her couture skills were recorded by the most important photographers of the time: Edward Steichen (1879 – 1973), George Hoyningen-Huene (1900 – 68), Cecil Beaton (1904 – 80) and Horst P Horst (1906 – 99), appearing in both French and British editions of Vogue magazine. In 1925 British Vogue hailed her as "perhaps the greatest geometrician among all French couturiers".

Her loyal clients included mainly European aristocrats and wealthy North Americans such as the Baroness Robert de Rothschild, Madame Citroën, Mrs Harrison Williams (Mona von Bismarck) and Lady Davis. Four of the Madeleine Vionnet dresses in our collection were worn by Lady Foley (about 1888 – 1968), wife of the seventh Baron Foley (1895 – 1927), a former flight lieutenant in the Royal Air Force. Lady Foley was among the women of privilege who could afford the finest quality textiles, meticulously crafted designs and highly personal attention offered by couture houses such as Vionnet's.

During the 1930s, Madeleine Vionnet experimented even more with classical-style draping and folding, inspired by the art of ancient Greece. Many of her garments were ingeniously constructed in one piece, without any fastenings. Vionnet was exceptional among couturiers of the time in that she did not sew down her draperies, but expected clients to perform a series of skilful manouevres to achieve the desired look. Her dresses also embody the Art Deco-era obsession with motion, as well as referencing Cubism and Modernism.

As well as her much-copied bias cutting technique and revolutionary approach to modern clothing, Vionnet was instrumental in introducing copyright laws for fashion design, and for promoting favourable working conditions – her employees enjoyed paid holidays, maternity leave, an on-site dentist, doctor and canteen.

At the outbreak of the Second World War, Vionnet closed her couture house, retiring in 1940. Having always shunned the limelight, her name faded fast, but she was rediscovered by fashion historians later in the 20th century. Despite only operating for around 25 years under her own name, Vionnet's influence on fashion is still felt today: her bias-cutting technique has been widely imitated and today's designers often cite her an an inspiration. 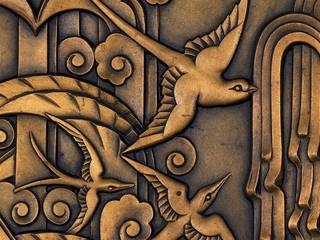