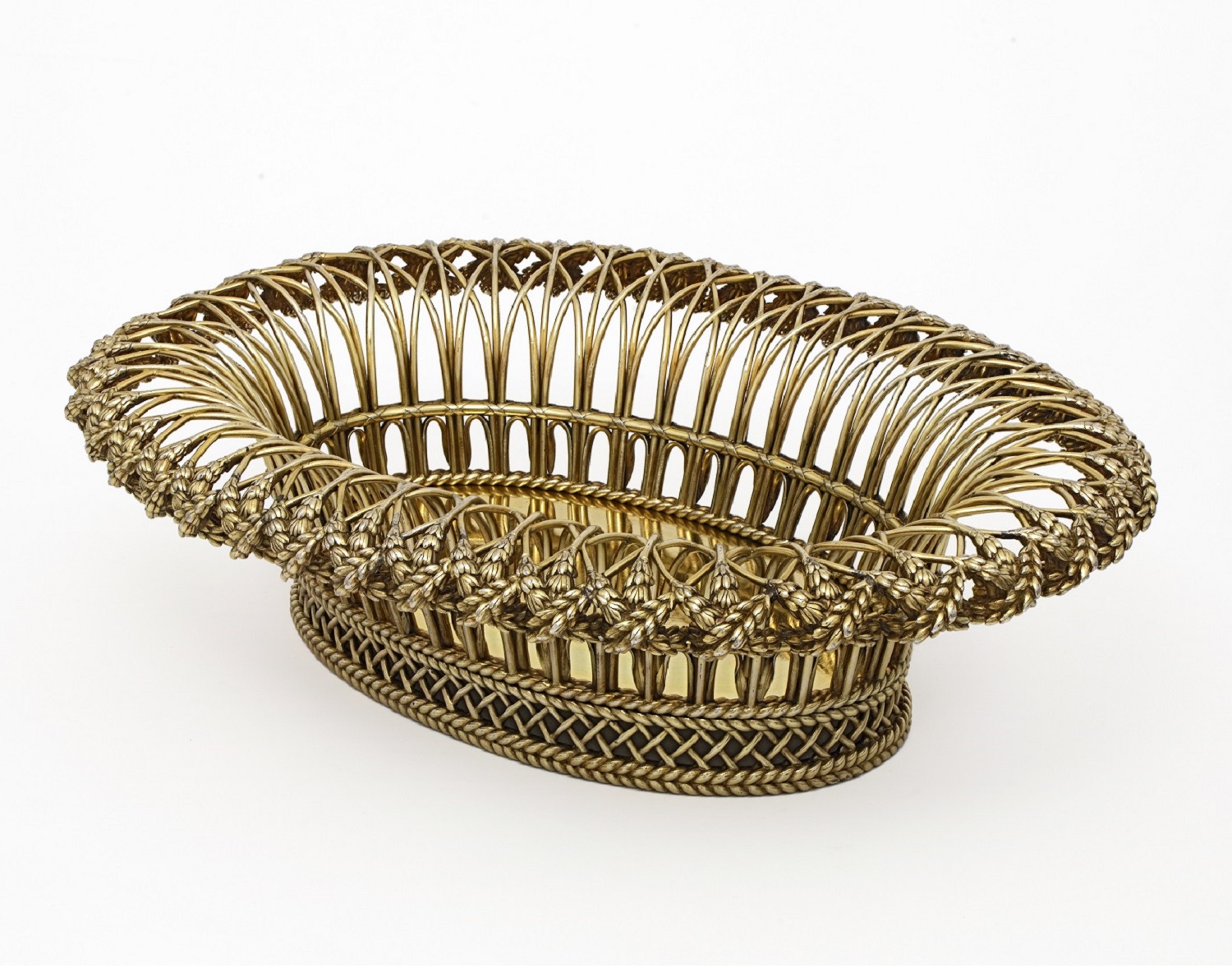 Paul Storr (1771-1844) was the most technologically sophisticated producer of silver of the Regency period.

In the V&A’s Whiteley Silver Galleries, the current temporary display of highlights of the Gilbert Collection includes a substantial silver-gilt basket supplied by Paul Storr to the wealthy collector and patron, William Beckford (1760-1844) of Fonthill Abbey, Wiltshire.

This basket, wrought to look like woven ears of wheat, was designed to serve bread at Beckford’s dinner table, but is extremely heavy and was most probably displayed  to impress.

Two soup tureens are currently on loan to Kunsthalle Würth in  Schwäbisch Hall, near Stuttgart, as part of the exhibition Miraculous Silver which has already attracted over 60,000 visitors and is open until the second week of January. If you haven’t done so already, why not read our blog post about the exhibition?

The monumental forms and ornament were influenced by French Egyptomania – stemming from Napoleon’s 1798 campaign in North Africa – as well as print sources and silver by Henri Auguste (1759-1816).

By the early 19th century, the immense wealth of Britain’s richest citizens enabled them to patronise the luxury trades of coach-builders, cabinet-makers and silversmiths. The Prince Regent (Later George IV) and his aristocratic contemporaries set the style of what became known as the Regency period. The most prestigious firm of London goldsmiths of the age, Rundell, Bridge & Rundell supplied silver at the forefront of fashion. Their large design studio included important artists such as John Flaxman and Jean-Jacques Boileau.

Up the spiral staircase in the the V&A’s Bollinger Jewellery Galleries, the Castlereagh inkstand, fashioned in 22 carat gold,  is a magnificent memorial to diplomacy in the age of Napoleon.

Its origins are set out in the following inscription:

‘This inkstand is composed of the gold taken from the portrait snuff boxes which were presented by the SOVEREIGNS of Europe whose Arms are engraved hereon to Viscount Castlereagh upon the signature of the several treaties concluded in the Years 1813, 1814, & 1815’

Castlereagh’s tireless efforts as Foreign Secretary to negotiate the alliances and treaties which culminated in the Treaties of Paris in 1814 and 1815, and the Treaty of Vienna in 1815, made him one of the principal architects of the defeat of Napoleon and of the reconstruction of Europe. The arms engraved on top of the platform of the inkstand are those of the four great Continental powers–Austria, Prussia, Russia and restored Bourbon France. On the sides are the arms of the Roman States–Bavaria, Portugal, Saxony, Sardinia, Hanover, Sweden, Württemberg, Naples, Spain, Denmark and the Netherlands.

Twenty-one of the gold boxes which Castlereagh had received from the sovereigns were deposited with Rundell’s, the royal goldsmiths, on 6 March 1817. The inkstand was completed in 1819 at a cost of £1135 9s, with a further £15 12s for the engraved arms. It is marked by Paul Storr and Philip Rundell for Rundell, Bridge and Rundell. A note from Rundell’s in the archives of the Marquis of Londonderry explains that the inkstand had been envisaged at a weight of 100 troy oz., but that Castlereagh had modified the original design of two tripods and one vase to a design incorporating two vases and the splendid palm tree taperstick, taking the weight to 148 troy oz. As you leave the Jewellery Galleries and descend the Library Stairs turn round to admire the splendid portrait of Lady Londonderry, a very recent addition.

One of Rundell’s best clients was Catherine the Great of Russia. The recently published catalogue of British Silver in the State Hermitage Museum illustrates several splendid pieces marked by Storr.

The most stately is surely the punch bowl, 1806-7, acquired by Grand Duke Alexander Alexandrovich, later Alexander III. The honeysuckle and tulip frieze recur on the sugar basin from this tea set of 1809/10 in the Gilbert Collection:

A recent exhibition at Koopman Rare Art in Chancery Lane showed over two hundred examples of Storr’s marked work and was the first devoted to this celebrated craftsman who directed workshops for the Royal goldsmiths Rundell, Bridge and Rundell.  Recent research demonstrates that Storr was an artistic director who choreographed a team of over 500 designers and modellers to produce astonishing results.  The cover of the accompanying book features a pair of candelabra centrepieces which were delivered in 1822-3 as part of a dinner service intended for 180 people by one of the richest men in Portugal.

The silver ranged in date from 1792 to 1838 coinciding with the industrial revolution and the Napoleonic wars. The book authored by Christopher Hartop with a preface by Kathryn Jones, Curator of Decorative Arts at the Royal Collection, is  entitled ‘Art in Industry: The Silver of Paul Storr’. Every copy sold will benefit the Victoria and Albert Museum’s funds for the acquisition of silver for the National Collection.

Hello i have 29 pieces of the stag hunt by paul storr that i was trying to find the value of and was wondering if you could help me out. Thanks Mike??

I have inherited a large Paul Storr soup tureen which is in perfect condition and has caused some excitement on specialized social media pages for antique silver lovers. One of the experts there (I think he is a trader) recommended that I contact you to find out if you would maybe be interested in acquiring the tureen. So that is what I am doing now. The weight is 4240 gramm; length 60 cm; width 40 cm; height 30 cm. Of course I can send you pictures of the tureen itself as well as the hallmarks and a certificate by a large South African auction house.
I would appreciate an indication if there is any interest or not.
Kind regards from Johannesburg
Dominik von Eisenhart-Rothe