Providing a new entrance, courtyard and purpose-built gallery for temporary exhibitions, the Exhibition Road Quarter will showcase the best of contemporary design, as well as celebrating the beauty of the V&A’s existing building. 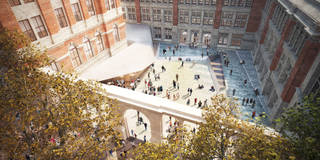 Amanda Levete Architects (AL_A) are working with the V&A on an exciting process to install what will be the first porcelain-tiled public courtyard in the UK. This choice of material responds specifically to the fabric of the original building and its collections, which include numerous striking examples of 19th century decorative ceramics. The courtyard will act as a venue for installations and events and will be served by a glass-fronted café. In addition to providing a range of new public spaces inside and outside the Museum, the project will create a new relationship between the heart of the V&A and Exhibition Road.

The Sainsbury Gallery, a new 1,100 square metre column-free space will be one of the largest temporary exhibition spaces in the UK and allow the V&A to significantly improve the way it designs and presents its world class exhibition programme.

Entry to the new Sackler Courtyard will be through the arches of the 19th-century screen designed by Sir Aston Webb. This screen, an integral part of the museum’s original building, was painstakingly removed and put into storage at the end of 2013, in order for the majority of the masonry to be reinstated at the end of the project.

From the Sackler Courtyard visitors will access the Sainsbury Gallery and wider Museum through the Blavatnik Hall, a major new entrance that we expect to welcome around half of the V&A’s 3.4 million annual visitors.

From the courtyard it will also be possible to see the previously hidden facades of Aston Webb’s original buildings, and detailed sgraffito decoration which will be made publicly accessible for the first time since its completion in 1873.

Following an extensive international competition, Amanda Levete Architects (AL_A) were appointed as the designers of this scheme. Work on the main construction began in January 2014, and the new spaces are due to open to the public in 2017.

We have so far raised over 95% of the project cost thanks to the generosity of The Monument Trust, The Dr Mortimer and Theresa Sackler Foundation, The Headley Trust, The Blavatnik Family Foundation, The Garfield Weston Foundation, the Heritage Lottery Fund and other generous donors including Peter Williams and Heather Acton and the Friends of the V&A.

A fantastic way to help the V&A is by supporting our current appeal Open the Gates. By donating you will help to provide access to the inspiring world of the arts for generations to come.

Amanda Levete Architects (AL_A) were one of seven shortlisted architectural teams, selected from over 110 expressions of interest from all over the world for the new courtyard, entrance and exhibition gallery competition.

The Exhibition Road Quarter continues the V&A’s commitment to working with young and emerging practices. AL_A were established in 2009, and their winning entry was submitted just two years later. Their scheme combines the newest technologies – a striking cantilevered gallery ceiling, for example, allowing the gallery to soar to 9m tall at its highest point – with a deep respect for the existing architecture, much of which will be revealed by the project.

The V&A is a hugely prestigious museum and it has special meaning for me because it's the home of art and architecture. I've dreamt of working on a major public and cultural project ever since I started as an architect, and it doesn't get much better than this. This isn't just about a gallery, it's an opportunity to create a new public space for London - South Kensington's Drawing Room”. She explains, “our first move, unlocking the potential to bring in new audiences, is to create a relationship between the museum and the street that does not exist today.

For more information on AL_A please visit their website.

The V&A is committed to keeping members of the local community involved and informed about the Exhibition Road Quarter. The project is an essential development for the future of the V&A where visitor numbers have more than trebled in the last decade, and the new facilities will offer huge benefits to the area. The courtyard, in particular, will provide much needed public space in which to gather and relax between museum visits.

We are producing regular newsletters for South Kensington residents and businesses and hold drop-in events in the museum for visitors to give their feedback.

The latest issue of our local newsletter can be downloaded here.

FIND OUT MORE ABOUT HOW TO SUPPORT THE PROJECT
We use cookies to enhance your experience on V&A websites. Read our cookie policy to find out more.